Oil prices could top $300 per barrel within the next five years, according to one industry expert.
28 February 2008

"I think the supply is showing some very troubling signs that we might well have already peaked and started [to slow] down. If we haven't, we are very close to it," he told Arabian Business. More >>>
Posted by Unknown at 11:55 AM No comments:

Get in step on global warming, CEO urges

"We no longer have the luxury of standing on the sideline,"

The oil and gas industry must embrace the reality of global warming and ensure it has a voice in setting policy or risk being marginalized while alienating the public, the CEO of ConocoPhillips told energy executives in Houston on Tuesday.

James Mulva, a keynote speaker at the annual Cambridge Energy Research Associates conference, said failure to engage would pave the way for policies that erode energy security and jeopardize economic and environmental health.

"We no longer have the luxury of standing on the sideline," Mulva said.

Rajendra K. Pachauri, chairman of the Intergovernmental Panel on Climate Change, followed Mulva at the podium and said he was glad to hear that "captains of industry" were on board with the need to address climate change. "I got the impression that what I have to say is redundant," he said. "It is within our means to mitigate greenhouse gases, and I'm delighted that the energy industry has actually said so and believes in it."

[The oil companies will perhaps discover the underlying paradigm and realize that they have to make the transition and become energy companies in order to survive. They need to make the switch and invest in alternative forms of energy production and supply. Editor]

Posted by Unknown at 1:41 PM No comments:

"Adaptation to climate change should be an integral component of all development projects. However, no organisation has yet undertaken a full assessment of climate change adaptation technologies and policies, with specific focus on the industrial sector," UNIDO Managing Director (Programme Development and Technical Cooperation Division) Dmitri Piskounov said here.

Piskounov was speaking at a session on Climate Change at the Delhi Sustainable Development Summit 2008 organised by The Energy Resource Institute (TERI). More >>>
Posted by Unknown at 10:02 AM No comments: 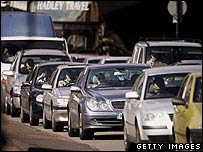 Markets need to be pointed in the right direction, Sir Mark says


The EU should ban the sale of cars that do under 35 miles to the gallon, the ex-chairman of oil giant Shell says.

The UK Society of Motor Manufacturers and Traders opposes the idea, saying drivers of the most polluting cars pay extra through road tax and petrol duty.

Expanding on the views he expressed in a BBC News website Green Room opinion column, Sir Mark said: "Nobody needs a car that does 10-15mpg.

"We need very tough regulation saying that you can't drive or build something less than a certain standard. You would be allowed to drive an Aston Martin - but only if it did 50-60mpg." [The Cayman Islands should also explore this initiative. Editor] More >>>

Posted by Unknown at 3:01 PM No comments:

Environmental issues are still a low priority for many small firms

CORPORATE PROFITS will plummet unless businesses take urgent steps to deal with the threats from climate change - that's the message from a new report by consultants Accenture.

While almost half of the 500 business leaders surveyed by Accenture believe climate change is now a major issue, few are doing enough to prepare for a future where being green is a necessary part of running a business rather than a political preference.

Mark Spelman, global head of strategy and one of the report's authors, said the rising costs of energy and carbon would soon mean that green business would be about far more than having a corporate social responsibility director.
advertisement

By 2020, those businesses that have not factored these costs into their budgets would find that they either cannot compete with rivals' prices or would face great upheaval from abruptly slashing costs. Either way, they would be in danger of going to the wall. More >>>
Posted by Unknown at 3:53 PM No comments: