This would not be a biblical apocalypse or even a Mayan one, but rather an event of our own making. The world has made so many problems for itself in recent decades that the whole edifice of civilization is showing signs of coming unglued.

This sort of thing has happened within living memory - remember 1914 and 1939 - so a year in which much comes undone should not come as a great surprise. If you are looking for a general theory of what is about to happen to us, you might start with Joseph Tainter's The Collapse of Complex Societies in which the author identifies 17 examples of rapid societal collapse. In a nutshell, if anybody thinks the Roman Empire collapsed from too much complexity, one should look at the U.S. tax code or the efforts to refinance the EU's sovereign debt. Compared to the machinations of the 7 billion people currently running around the world, the Romans were running a kindergarten.

Whether the global civilization, or significant parts thereof, comes unstuck sooner or later is obviously a judgment call, but a case can be made that some very bad things might be coming in the next year or so. There would seem to be two fundamental problems behind the coming upheavals. One is that we are running into constraints on resources and the other is that the OECD nations have simply accumulated so much debt that it is unlikely to ever be repaid. No one ever thinks of the atmosphere's ability to absorb and carry off carbon emissions as a resource, but as the world's climate changes for the worse, that is exactly what it is. It could easily turn out over the course of the next 10 decades, that the atmosphere's ability to absorb greenhouse gases turns out to be far more important than reserves of fossil fuels. More

Harnessing the Sun's Energy for Water and Space Heating

The pace of solar energy development is accelerating as the installation of rooftop solar water heaters takes off. Unlike solar photovoltaic (PV) panels that convert solar radiation into electricity, these "solar thermal collectors" use the sun's energy to heat water, space, or both.
China had an estimated 168 million square meters (1.8 billion square feet) of rooftop solar thermal collectors installed by the end of 2010—nearly two thirds of the world total.  This is equivalent to 118,000 thermal megawatts of capacity, enough to supply 112 million Chinese households with hot water.  With some 5,000 Chinese companies manufacturing these devices, this relatively simple low-cost technology has leapfrogged into villages that do not yet have electricity. For as little as $200, villagers can install a rooftop solar collector and take their first hot shower. This technology is sweeping China like wildfire, already approaching market saturation in some communities. Beijing’s goal is to reach 300 million square meters of rooftop solar water heating capacity across the country by 2020, a goal it is likely to exceed. 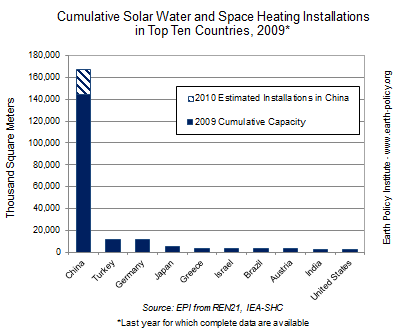 Other developing countries such as India and Brazil may also soon see millions of households turning to this inexpensive water heating technology. Once the initial installment cost of rooftop solar water heaters is paid back, the hot water is essentially free.
In Europe, where energy costs are relatively high, rooftop solar water heaters are also spreading fast. In Austria, 15 percent of all households now rely on them for hot water. Germany is also forging ahead. Some 2 million Germans are now living in homes with rooftop solar systems. Roughly 30 percent of the installed solar thermal capacity in these two countries consists of “solar combi-systems” that are engineered to heat both water and space.
The U.S. rooftop solar water heating industry has historically concentrated on a niche market—selling and marketing more than 9 million square meters of solar water heaters for swimming pools between 1995 and 2005. Given this base, the industry was poised to mass-market residential solar water and space heating systems when federal tax credits were introduced in 2006. Led by Hawaii, California, and Florida, annual U.S. installations of these systems have more than tripled since 2005. More
Posted by Unknown at 2:24 PM No comments:

There are times when the unraveling of a civilization stands out in sharp relief, but more often that process makes itself seen only in the sort of scattered facts and figures that take a sharp eye to notice and assemble into a meaningful picture. How often, I wonder, did the prefects of imperial Rome look up from the daily business of mustering legions and collecting tribute to notice the crumbling of the foundations on which their whole society rested?

Nowadays, certainly, that broader vision is hard to find. It’s symptomatic that in the last few weeks I’ve  fielded a fair number of emails insisting that the peak oil theory—of course it’s not a theory at all; it’s a hard fact that the extraction of a finite oil supply in the ground will sooner or later reach a peak and begin to decline—has been rendered obsolete by the latest flurry of enthusiastic claims about shale oil and the like. Enthusiastic claims about the latest hot new oil prospect are hardly new, and indeed they’ve been central to cornucopian rhetoric since M. King Hubbert’s time. A decade ago, it was the Caspian Sea oilfields that were being invoked as supposedly conclusive evidence that a peak in global conventional petroleum production wouldn’t arrive in our lifetimes. Compare the grand claims made for the Caspian fields back then, and the trickle of production that actually resulted from those fields, and you get a useful reality check on the equally sweeping claims now being made for the Bakken shale, but that’s not a comparison many people want to make just now.
On the other side of the energy spectrum, those who insist that we can power some equivalent of our present industrial system on sun, wind, and other diffuse renewable sources have been equally vocal, and those of us who raise reasonable doubts about that insistence can count on being castigated as “dormers.” More

Every November following the publication of the IEA's World Energy Outlook, the leadership of the Agency travels to major capitols in an effort to explain to the world's leaders the conclusions of the new publication. Parts of this year's briefings contain not-so-subtle hints as to what sort of energy policies the world's leaders might like to follow if they want to avoid killing off all life on earth a century or so from now. Earlier this week the travellers stopped in Washington, where sandwiched between visits to various dignitaries they briefed an assemblage of some 200 journalists.

Although I had already ploughed through the 600-page report and extracted some wisdom for these columns, I thought it might be interesting to hear about how the IEA's leaders, who oversaw the scope and approved the findings of the new report, saw the global energy situation. 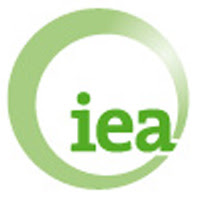 The Agency's new Executive Director and former Economic Affairs Minister for the Netherlands, Maria van der Hoeven, went first, making the point that the global energy situation has become far more challenging during the past year due to the Fukushima nuclear meltdowns, the Arab Spring uprisings, and the financial upheavals in the EU. She emphasized that the world must invest some $38 trillion over the next 25 years to maintain the flow of energy that we have become accustomed to having.

IEA's Chief Economist Fatih Birol gave the heart of the presentation. Birol began with his three principal worries: Despite global lip service to slowing global warming, CO2 concentrations in the atmosphere continued to grow last year; All governments claim to want more efficient use of energy resources, yet efficiency continues to drop; and finally high energy prices with oil prices on track to top $150 a barrel within a few years will kill any economic recovery. As an example, Birol pointed out that coal had been selling for $60 a ton as long as the Chinese were exporting it. This year when China switched from being a coal exporter to becoming even a rather small importer, prices rose to $120 a ton. More

Iran's Growing Isolation a Dubious Win for the West

WASHINGTON, Nov 30, 2011 (IPS) - Scenes from Tehran Tuesday of bearded Iranian youth swarming over the walls of the British embassy evoked memories of the 1979-81 hostage crisis that created the image of Iran as a pariah state. 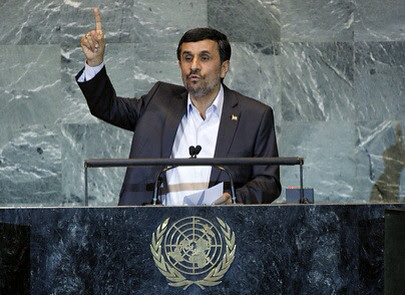 But the incidents vary in ways that are more worrisome for international peace than the seizure of the U.S. embassy by radical students some 32 years ago.
The latest events come in the context of an escalating intelligence and economic war between Iran and the West over its nuclear programme that could spiral out of control at a time that the world economy and an already unstable Middle East can ill afford.

The hostage crisis took place while Iran was still in the throes of revolution and solidifying its form of government. Then leader Ayatollah Ruhollah Khomeini embraced the action after it became clear that it was both popular and a means of disposing of moderate rivals within the new regime.
In contrast, Tuesday's event - despite an expression of regret by Iran's foreign ministry - appears to have been orchestrated by the regime's security forces.

It followed two mysterious explosions, one of which destroyed an Iranian missile facility, and new U.S. and European economic sanctions, including a British cutoff of dealings with Iran's Central Bank, a move that hawkish U.S. lawmakers are hoping to replicate by the end of this year. Even before Tuesday's attack, the European Union was scheduled to consider additional sanctions at a meeting in Brussels Thursday.

Police reportedly stood by while members of the Basij - a volunteer force of thuggish young men considered more loyal to the office of the current leader, Ayatollah Ali Khamenei, than to the government headed by President Mahmoud Ahmadinejad - broke into the British compound in downtown Tehran, destroyed property and burned documents. More
Posted by Unknown at 12:35 PM No comments: