Davos: The Need for Renewables in Our Shared Future 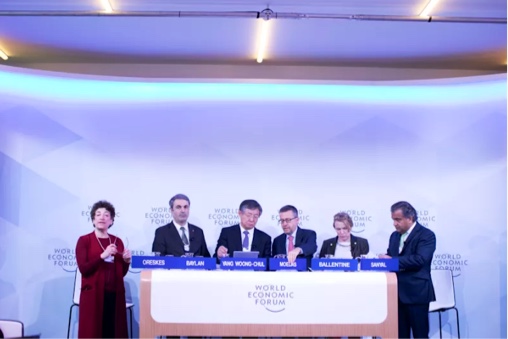 The theme this year was creating a shared future in a fractured world, which is exactly what our global leaders should be talking about. And this year the forum gathered together the most powerful aggregation of global corporate and government leaders in recent decades.

Climate change at the forefront

I participated in the forum and led a dialogue about the role of renewable energy in creating a shared future—a key theme at the forum, touted by many heads of state. In the opening plenary, Indian Prime Minister Narendra Modi named climate change the number one challenge to civilization as we know it, and shared his country’s ambitious goal of producing 175 gigawatts of renewable energy by 2022. French President Emmanuel Macron said he wants to “make France a model in the fight against climate change,” and will shut down all the country’s coal-fired power plants by 2021.

The numerous energy tracks at the forum were largely made up of policy makers, utilities, and technology providers. The discussion around renewable energy is often thought of as a three-legged stool: technology, finance, and policy. While those three things are indeed crucial to advancing renewable energy, there is also a critical fourth element that is much harder to shift—people. Unfortunately, like many large conferences, the voice of energy consumers was largely lacking at Davos.

I participated in the Accelerating Innovation for Sustainable Energy panel, which had a rich, dynamic dialogue around accelerating technological innovation. There was consensus around the important role that government can play in both financing technological innovation to start the research and development process, and also shepherding winning technologies all the way through commercialization. However, often where technology fails is not in the early R&D phase but in pre-commercialization—a phase when a technology often requires no changes to policy or finance, but just needs buyers to take a risk and use something they haven’t used before. It’s where human dynamics really come into play.
https://goo.gl/mLN8gR

Posted by Unknown at 4:49 PM No comments: