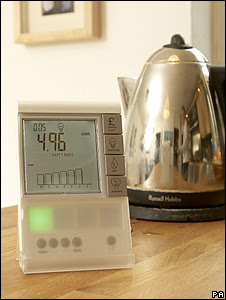 Tuesday, 19 May 2009 - Smart meters will play a central role in delivering an energy infrastructure fit for the 21st Century, says Stephen Cunningham. In this week's Green Room, he argues why he believes the technology will help deliver the necessary carbon saving needed to prevent dangerous climate change.

If time waits for no man, climate change is even more ruthless.
Yet people in the UK, along with much of Europe, have been waiting for years for the intentions of government and its increasingly ambitious carbon reduction targets to be reinforced with decisive implementation plans.
Last week, that wait came to an end - at least in the field of energy management.
Industry has finally been given the backing it needs to unlock the potential of "smart metering". More >>>
Posted by Unknown at 4:18 AM No comments: