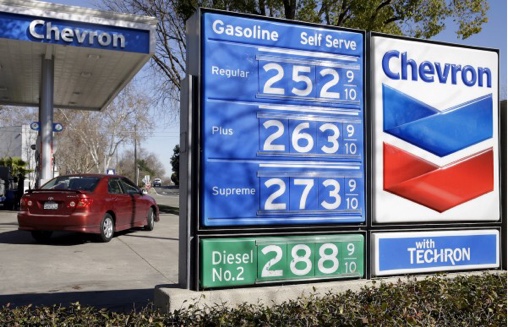 Big Oil’s lies about the existential risk posed by its product are now catching up with the industry and threatening profits.

For the first time, one of the major publicly owned fossil fuel companies admitted publicly to investors that climate change lawsuits poses a risk to risk to its profits.
You’re probably thinking that seems like an obvious admission. After all, 190 nations unanimously agreed in the December 2015 Paris climate deal to leave most fossil fuels in the ground because of the existential threat they pose to human civilization.

But this is Big Oil — the industry that has been denying or pretending to deny the existence of climate change for over half a century.
In the “risk factors” section of Chevron’s 2016 10-K financial performance report to the Securities and Exchange Commission (SEC) — amid a discussion of how those pesky climate rules governments are enacting might hurt demand for its product — is this sentence: “In addition, increasing attention to climate change risks has resulted in an increased possibility of governmental investigations and, potentially, private litigation against the company.” http://bit.ly/2mndUir