Peak Oil and Apocalypse Then

Based on the past experience of Japan, North Korea and Cuba, an Oxford researcher identifies three possible responses to peak oil: Predatory militarism, totalitarian retrenchment and  socioeconomic adaptation.

Oil is the backbone resource of industrial society, but the Oil Age will come to an end, someday. Thepessimists say the world reached maximum oil production in 2008.Middle-of-the-road optimists say peak oil won’t occur until 2030. Either way, production is already past its peak and on a terminal decline in 54 of the 65 largest oil-producing countries in the world, including Mexico, Norway, Indonesia and Australia. It’s been declining in the lower 48 states of the United States since 1970.

What will happen when cheap oil is no longer available and supplies start running short? More >>>
Posted by Unknown at 10:28 AM No comments:

How The Global Oil Watchdog Failed Its Mission

25 MAy 2010 - 12 years ago, the International Energy Agency (IEA) discovered that Peak Oil would threaten the prosperity and stability of our societies. Yes, they knew it. While some IEA officials tried to inform the world about this game-changing event, it appears that others had different priorities.

In 1998, the IEA team working on the influential World Energy Outlook (WEO) made a detailed and authoritative assessment about the future of oil production. The team was composed of the world's finest energy experts, amongst whom Jean-Marie Bourdaire, coordinator of the study, Ken Wigley, Keith Miller and the man who would later become Chief-Economist of the IEA, Dr. Fatih Birol.

By using confidential databases and sophisticated expertise, they reached a dramatic conclusion: Peak Oil, the moment when global oil production starts its irreversible decline, would happen well before 2020, around 2014. More >>>
Posted by Unknown at 12:50 PM No comments:

Oil, risk and technology: Choices we need to make

The oil leak in the Gulf of Mexico should be a wake-up call to governments and energy companies, argues William Jackson, raising deep questions about our addiction to oil. Compensation may be paid for immediate damages - but what about the wider environmental harm?
The world changed one summer's day in 1858.
In a field in Pennsylvania, in the United States, the world's first specially constructed deep well struck oil.
The trickle of oil from the Earth, long extracted by humans in small amounts, became a torrent.

It is time to look again at the technology and risks involved in getting the oil our societies are addicted to
Relatively easy to find, extract, process, store and transport - and above all cheap - liquid oil quickly became our most important energy source to cook, heat, cool and transport things.
From plastics to supermarkets, and from globalised industry supply chains to the layout of our towns and cities, almost every aspect of human life has been radically altered over the past 150 years by oil.
Although cheap and plentiful oil has given many people choices and freedoms that never existed before, our addiction has been costly, measured in increased air and water pollution, rampant land use change, overharvesting of our seas, increasing greenhouse gas emissions and consequent climate change, acid rain and urban sprawl. More >>>>
Posted by Unknown at 11:12 AM No comments:

Ignoring Calls for Moratorium, Shell Seeks to Drill in Arctic Seas This Summer

Shell yesterday pushed ahead with plans to drill in the Arctic Sea this summer, defying calls for a moratorium on offshore exploration in the pristine wilderness following the Gulf of Mexico disaster.California's governor, Arnold Schwarzenegger, this month scrapped plans to allow offshore drilling in the state for the first time in more than 40 years and environmentalists have called for a halt in the Arctic after President Obama opened up the area to drilling for the first time last month.
Posted by Unknown at 7:36 PM No comments:

Posted by Unknown at 6:23 PM No comments: 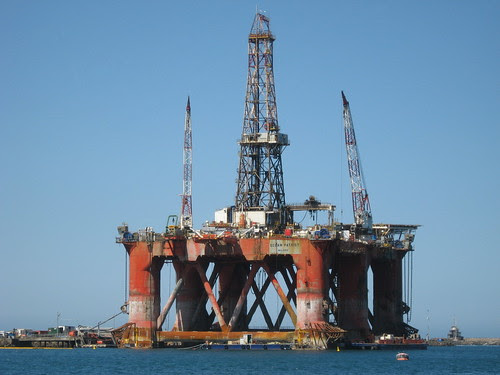 Santa Rosa, CA (2. April 2010) With the media coverage on the horrific Gulf Coast oil spill largely centering on the volume of the spill and efforts to stem the outflow,
Post Carbon Institute offers 12 additional important angles, each tackled by one of the Institute’s 29 acclaimed Fellows. For further perspectives, information and insight contact the Institute. More >>>
Posted by Unknown at 5:45 PM No comments: