At some point, we're going to reach our peak oil supply, says ROD DREHER. Will you be ready?

It cost more than $40 to fill up my Honda Accord last week. That's a pain, but not one I have to suffer often. Not only does the Honda get good gas mileage, I live close to my downtown job, so I put maybe 6,000 miles a year on the car. The price of oil will have to go up a lot more before my wallet feels the burn – at the gas pump, at least.

But the price of oil affects far more than our daily commutes. Our entire consumer economy is built on the idea that oil will be relatively inexpensive and infinitely available. Read More

Posted by Unknown at 9:49 AM No comments:

Powering up for a hydrogen economy 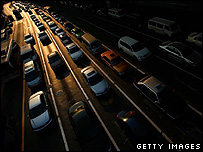 Sooner or later the world is going to have to make the switch away from fossil fuels, says Keith Guy. In this week's Green Room, he explains what needs to be done to make the vision of a global hydrogen economy a reality.
n increasing global population, rising standards of living and more industrial production mean the amount of energy the world consumes could rise by 50-60% over the next 25 years.

Posted by Unknown at 6:18 PM No comments: Energy security cuts both ways, we are told. It is not only the gas-guzzling American motorist who needs comforting, but also the bloated petrocrats of the Gulf. At the Opec summit meeting in Riyadh this weekend, the talk will not be of supply insecurity, but of demand collapse. Even as truckers threaten mass meetings in Britain to protest about the price of diesel, the risk is seen on the downside from the perspective of the producers. Algerians attending the Rome World Energy Congress this week were less than impressed by the screeching about $100-a-barrel oil and shortages.

“What do you think the American economy will be doing next year?” was the comment of Chakib Khelil, the Algerian Oil Minister. “If there is a recession, then we won’t have a supply problem.” No need to pump more crude, then. Read More

Posted by Unknown at 4:17 AM No comments: Houston TX (SPX) Nov 14, 2007
A study released today by Rice University's Baker Institute for Public Policy finds that the "Big Five" international oil companies (IOCs) are spending less money on oil exploration in real terms despite a four-fold increase in operating cash flow since the early 1990s. On the flip side, the study, "The International Oil Companies," finds that second-tier oil companies are spending more in exploration, positioning themselves to be in better shape when it comes to future oil reserves.

The analysis is based on Baker Institute research on investment expenditures by the IOCs, the next 20 largest U.S.-based oil firms and national oil companies (NOCs). Data were culled from U.S. Securities and Exchange Commission filings going back to 1995 and, in the case of NOCs, to news reports and other public data.

The study found that the Big Five (ExxonMobil, Royal Dutch Shell, BP, Chevron and ConocoPhillips), used 56 percent of their increasing cash flow on share repurchases and dividends, which were good for investors in the short term but put at risk the companies long-term oil reserves.

"The handwriting is on the wall. The oil majors are not replacing reserves," said Amy Myers Jaffe, co-author of the report and the Wallace S. Wilson fellow for Energy Studies at the Baker Institute. "It's as if they are slowly liquidating their long-term asset base. They may see a declining rate of production over time and eventually that is bad news for both their shareholders and consumers." Read More

Posted by Unknown at 3:09 AM No comments:

Investment opportunities for public, private cos.

NEW DELHI: Upbeat about the positive outcome of the India-Africa hydrocarbon conference held earlier this week, Union Petroleum and Natural Gas Minister, Murli Deora, has mooted an eight-point agenda for India envisaging enlarged cooperation, including major investments and acquisitions in the oil and gas sector with the African nations in its aim to seek energy security for the country. Read More

Posted by Unknown at 1:35 PM No comments: