Get ready for more blackouts

When Hurricane "Superstorm" Sandy hit New York, a large part of Manhattan— the wealthiest place east of the Taj Mahal— was without power for weeks. At least it wasn't unfashionable. According to a new report, blackouts are becoming the new normal. 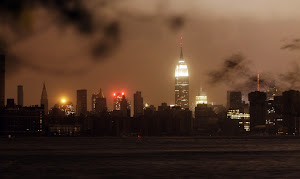 The Department of Energy's new report answers the question, "What happens when you mix water and electrical sockets?" Actually, it's "How will climate change affect the nation's power grid?" Same thing. "In 2012, the United States suffered eleven billion-dollar weather disasters," they say, "the second-most for any year on record, behind only 2011." Hm. Someone better cover up all the plugs.

The national power grid has been cobbled together over the course of a century. Global warming means more storms, more flooding, and more power outages. The Northern US is projected to get wetter; the Atlantic is projected to produce stronger hurricanes. All in all, "The number of outages caused by severe weather is expected to rise as climate change increases the frequency and intensity of hurricanes, blizzards, floods and other extreme weather events."

The government and the energy companies are investing tens of billions, but if you think that's going to be enough, perhaps you have not looked at a life-size map of America lately. That shit isbig.

Posted by Unknown at 1:08 PM No comments:

General Atomics has announced that it is among the small modular reactor (SMR) developers seeking funds from the US Department of Energy. It has submitted its Energy Multiplier Module (EM2), a helium-cooled high-temperature reactor. 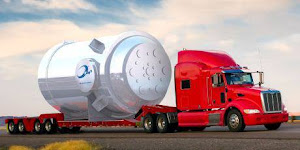 The Department of Energy (DoE) intends to fund up to two designs for SMRs through a cost-shared partnership which will support first-of-a-kind engineering, design certification and licensing. With the first round of funding allocated to B&W in late 2012, the DoE is now reviewing applications under a second round.

General Atomics (GA) has now confirmed that it is one of several SMR developers to have submitted proposals in the second round. Its proposal is for the EM2, a modified version of its Gas-Turbine Modular Helium Reactor (GT-MHR) design.

The EM2 employs a 500 MWt, 265 MWe helium-cooled fast-neutron high-temperature reactor operating at 850°C. This would be factory manufactured and transported to the plant site by truck. According to GA, the EM2 reactor would be fuelled with 20 tonnes of used PWR fuel or depleted uranium, plus 22 tonnes of uranium enriched to about 12% U-235 as the starter.

It is designed to operate for 30 years without requiring refuelling, the company said. Used fuel from the EM2 could be processed to remove fission products (about 4 tonnes) and the balance then recycled as fuel for subsequent cycles, each time topped up with four tonnes of used PWR fuel. The module also incorporates a truck-transportable high-speed gas turbine generator.

General Atomics has been the primary developer of modular helium-cooled nuclear power reactor systems, while its TRIGA research reactors have operated around the world for over 45 years. GA has teamed up with Chicago Bridge & Iron, Mitsubishi Heavy Industries and Idaho National Laboratory to develop the EM2.

Senior vice president of GA's energy and advanced concepts group John Parmentola commented, "We welcome the opportunity to join the Department of Energy in advancing the next generation of nuclear technology for reliable and cost-effective clean energy, for this century and beyond."

In November 2012, the Babcock & Wilcox (B&W) mPower reactor was selected as the winner of the first round of funding, receiving access to $79 million to commercially demonstrate the design by 2022. A second round of funding was announced in March 2013. The DoE anticipates awarding those funds by mid-January 2014. The maximum amount available in each of the first and second rounds is set at $226 million. More

Posted by Unknown at 4:44 PM No comments: 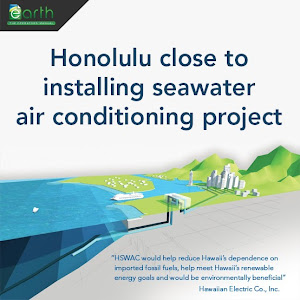 Termed as one of the largest energy-efficiency projects in the state, the seawater air-conditioning system aims to eliminate the need for 178,000 barrels of oil per year by saving enough electricity to power more than 10,000 homes.

“The system promises significant savings in energy that will help move us closer to our goal of more renewable energy use for the state,” Clay said.

The long-planned project, which recently increased its anticipated cost by $30 million because of delays, has not been able to garner the amount of support from customers that it had anticipated. Most recent estimates put the total project cost between $215 million to $220 million.

The much-needed funding from the Ulupono Initiative comes at a crucial time for Honolulu Seawater Air Conditioning.

“Not only do the missions of both organizations — to create a more sustainable future for Hawaii — align perfectly, Ulupono’s investment represents a strong vote of confidence in the potential of HSWAC’s deep seawater cooling technology to greatly improve the quality of life in our island community,” HSWAC President and CEO Eric Masutomi said in a statement.

The system works by cooling water to provide air conditioning to buildings in downtown Honolulu by pumping deep ocean water through a pipeline more than four miles offshore to a cooling station in Kakaako.

Capital Cooling is serving as a management consultant as well as a $500,000 co-investor with the Ulupono Initiative on the project, Honolulu Seawater Air Conditioning said.

Honolulu Seawater Air Conditioning is awaiting a federal environmental impact statement’s record of decision, which is expected to be out in November with the rest of the permits being contingent on the federal EIS, a spokesman for HSWAC told PBN. More

Posted by Unknown at 8:58 PM No comments:

Big nuke company decides renewables are a better bet in the U.S.

The world’s largest operator of nuclear power plants is dumping its stake in American reactors, turning its focus instead to wind and solar power.

French utility company EDF announced this week that it will sell its stake in Constellation Energy Nuclear Group (CENG), which operates five nuclear reactors in New York and Maryland.

EDF cited cheap power produced by fracked natural gas as the big reason why it’s abandoning its American nuclear facilities. But the company said it will now focus its American business strategy not on fossil fuels but on renewable energy. From Reuters:

“Circumstances for the development of nuclear in the U.S. are not favorable at the moment,” [EDF Chief Executive Henri] Proglio said.

“It is simply not easy to invest in nuclear and recover your money there,” Volk said.

Proglio said EDF would now focus on renewable energy in the United States. EDF employs 860 people in U.S. solar and wind, and since 2010 its generating capacity has doubled to 2.3 gigawatts. It manages another 7 gigawatts for other companies.

Mark Cooper, a senior fellow at the Vermont Law School’s Institute for Energy and the Environment, recently published a 40-page obituary [PDF] for the nuclear industry. From an article published a couple of weeks ago in The Plain Dealer:

Cooper, who thinks nuclear energy’s cost overruns and frequent shutdowns have always made it more expensive than it appears, recommends that the industry develop an orderly closing plan over the next few years, avoiding the rate chaos that unplanned closings might create.

“In 2013, more (nuclear) capacity retired early than in any year of the U.S. commercial nuclear sector,” he said in a press briefing. “In recent months, four reactors have been closed in early retirement, five major up-rates (increases in generating capacity) were cancelled.

“The bottom line is that the tough times the nuclear power industry faces today are only going to get tougher. Over three dozen reactors in almost two dozen states are at risk of early retirement. And a dozen face the greatest risk of being shut down,” he said.

Still, we won’t be rid of nuclear energy any time soon. About 100 reactors are still operating around the country, and two more are being built at an existing plant is in Georgia.

And even closing down retired nuclear power plants is a long and costly affair. The shutdown and cleanup at the Kewaunee plant in Wisconsin could cost $1 billion and take more than 50 years. More

Posted by Unknown at 9:56 PM No comments: