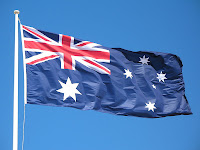 Mr Cransberg yesterday called for a national security strategy to guarantee the nation's energy requirements for the next 50 to 100 years.

"Energy security is absolutely critical in the issue of climate change and our capacity to meet the greenhouse challenge," he told yesterday's meeting of the American Chamber of Commerce in Australia. More >>>
Posted by Unknown at 12:17 PM No comments:

Opinion: Now is the perfect time for a dollar-a-gallon gasoline tax

26 November 2008 - Don't look now, but energy history is on the verge of repeating itself. All those discussions of a new paradigm in the form of conservation and alternative sources are washing away in less expensive oil.

Six months ago, people were incensed by the greed of foreign oil producers; today "inexpensive" gasoline is a welcome respite in an otherwise failing economy. All the big talk of energy independence in Congress has been pushed aside as we struggle to keep our jobs and pay our mortgages. American shortsightedness, one of our most abundant qualities, has reasserted its place in our lives.

The problem is that we stand at a brief moment in history, and nothing more. None of the major factors are different today with oil temporarily at $60 per barrel than they were six months ago when oil sold at nearly $150 per barrel. The petroleum-producing countries have not gone soft on their prices, nor have societies made major shifts in their energy demands other than the vagaries associated with slowing economies. The facts on the ground (perhaps better said, "in" the ground) remain the same. We must remember that:

Posted by Unknown at 7:42 PM No comments:

November 24, 2008 - The worldwide economic crisis is prompting a growing number of countries to back away from pledges to cut greenhouse gas emissions and invest in clean energy, just a week before the start of talks in Poland on a new worldwide climate change treaty.

In the United States, some business groups are calling on President-elect Barack Obama to move cautiously in tackling global warming, saying that a too aggressive response could prolong the economic downturn and cost jobs.

But a growing chorus of other businesses, environmentalists, and politicians are calling for a green-based economic recovery.
An enormous federal government investment in clean technology would provide low-cost capital to accelerate energy efficiency, build massive renewable energy projects, and jumpstart a sustainable low-carbon economy, these groups say. Such a Green New Deal, woven into the economic stimulus package being crafted for early next year, could create millions of government-subsidized jobs and build a new energy infrastructure. More >>>

Posted by Unknown at 9:13 AM No comments:

November 20 2008 - The sudden decline in crude prices has taken oil producing nations by surprise, but few will be hurt as much as Syria, which is also grappling with rapidly falling supply. The double blow has huge implications for the economy.

"Energy is a problem," says Nabil Sukkar, an economist who heads the Syrian Consulting Bureau. "Our energy-generating capacity is below demand and our oil reserves are falling, while our gas reserves have not been developed rapidly enough."

Syria's dwindling resources are often cited by analysts as one of the main reasons the country needs to end its international isolation, a process that has now started with improved ties with Europe. David Miliband, UK foreign secretary, was in Damascus this week in the latest sign of a thaw in ties between the west and Syria.

While fighting off pressure from the US and other western states in recent years over alleged interference in Iraq, Lebanon and the Palestinian territories, Syria has also struggled for economic survival. More >>>

Posted by Unknown at 8:09 PM No comments:

DENVER, Nov 17, 2008 -- National and international energy agencies have long downplayed the statistics and significance of oil depletion. Finally, in Wednesday's World Energy Outlook (WEO) 2008 report, the Paris-based International Energy Agency (IEA) conclusively recognized the reality of "Peak Oil" and the magnitude and implications of large annual decline rates on the world's annual oil production.
While the IEA's report is groundbreaking in acknowledging the problem, the Association for the Study of Peak Oil and Gas USA (ASPO-USA) finds unwarranted optimism in the report's projections of oil production that are inconsistent with known decline rates -- acknowledged in the report at more than six percent per year.
"Years of data from the majority of oilfields around the world show steady or declining production," says Steve Andrews, co-founder of ASPO-USA. More >>>
Posted by Unknown at 9:10 PM No comments:

The Peak Oil Crisis: The First Rule of Holes

Thursday, 13 November 2008: America has dug itself into the deepest hole it has been in since 1860 when the dispute over slavery reached its zenith.
That hole took five years of war and 150 years of social discord before we could start climbing out. The current hole, reliance on fossil fuels for nearly everything, will also take many decades of hardships to work itself out.
For now however, digging our hole deeper continues everywhere. Oversized gas-guzzling automobiles continue to be built and sold by the millions. New generations of kerosene-guzzling airliners are being readied for the market. Houses and all sorts of buildings requiring excessive amounts of energy to be habitable continue to be built. Roads are being widened and lengthened. Our great national hole deepens every day.
Getting out of this hole will not be painless.
At the top of the national agenda this week is what to do with the automobile industry which employs millions, is burning through billions each month, and will be utterly bankrupt by New Years. More >>>
Posted by Unknown at 8:34 PM No comments:

Peak Oil: Get Ready for the Oil-Supply Crunch, IEA Says 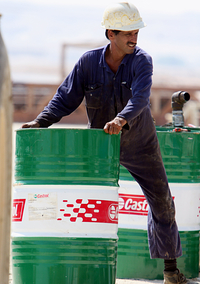 November 12, 2008 - Lower oil prices these days are both a result of the economic slowdown and a possible cushion. But they could be a very mixed blessing.

The Paris-based International Energy Agency is worried about an oil supply crunch in coming years. It’s not due to geology—the IEA says the world has plenty of oil, in one form or another. But trying to match oil supplies to growing oil demand in coming years is a Herculean task made all the harder by cheapish crude prices which make oil companies think twice about new investments.

The biggest challenge will come between 2010 and 2015, the IEA says in its 2008 World Energy Outlook. For the next couple of years, the oil pipeline is well supplied. But that trails off after 2010. By 2015, the world needs to find an additional 7 million barrels per day of oil above and beyond all the exploration projects currently in the pipeline. And to get that oil to market by the middle of the decade, those exploration projects need to get started now. More >>>
Posted by Unknown at 2:23 PM No comments:

OPEC to cut supply in December if market unchanged - Iran

The credit crisis and economic slowdown could shave as much as 3 million barrels per day (bpd) from global crude demand, Khatibi said.

"If everything is the same and the trends continue like this then OPEC will have to do something," Khatibi said in an interview by telephone.

"We have to balance the market. Recent indications are that demand could have fallen by 2 to 3 million barrels per day. Stocks are rising."

The day the oil runs dry

Abu Dhabi{ 08 November 2008 - For centuries civilisations have been built on trade. Athens on silver, Rome on wine and olive oil. The UAE, however, is built on a different kind of oil. But its reserves cannot last forever, which has seen two cities embark along very different paths, as Jamie Stewart reports.

The Kempinski Emirates Palace, Abu Dhabi, is home to an exhibition showcasing the under-construction Saadiyat Island development. An exhibition that has been toured, among many, by one George W Bush.

The exhibition is bordered by a wall covered with facts and figures concerning the growth of the UAE. Hidden among this wall is a white board sporting a series of bar charts that may have raised the eyebrows of a keen-eyed Bush on his January visit to the capital.

We are looking at how to incorporate the culture and heritage of Abu Dhabi.

Oil, as we know, cannot last forever. Both Abu Dhabi and Dubai have begun to demonstrate that it's time to begin laying the groundwork within which their societies can operate without the financial benefits and guarantees that oil brings to the respective populations. More >>>
Posted by Unknown at 10:15 AM No comments:

Peak Oil: You Can Run, But You Can’t Hide From Higher Oil Prices 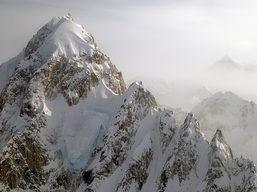 November 6, 2008 - What does it say when the normally conservative International Energy Agency is even gloomier than already depressed markets? That this autumn’s relatively cheap oil is likely a flash in the pan—and that triple-digit oil will soon be a permanent fixture again.

The Paris-based IEA, energy adviser to rich countries, is warning that crude oil will average $100 a barrel between 2008 and 2015 because of a looming supply crunch. That’s a more pessimistic take than the oil market itself, which prices forward oil futures contracts in the $80s (for 2010 and 2011) and around $90 (for 2012 and 2013). The biggest cause of that coming crunch, the IEA says, is “under-investment” in new and existing fields in order to make sure oil production keeps pace with production declines and growing global demand. More >>>
Posted by Unknown at 5:16 PM No comments:

Solar Power Game-changer: 'Near Perfect' Absorption Of Sunlight, From All Angles

By developing a new antireflective coating that boosts the amount of sunlight captured by solar panels and allows those panels to absorb the entire solar spectrum from nearly any angle, the research team has moved academia and industry closer to realizing high-efficiency, cost-effective solar power. “To get maximum efficiency when converting solar power into electricity, you want a solar panel that can absorb nearly every single photon of light, regardless of the sun’s position in the sky,” said Shawn-Yu Lin, professor of physics at Rensselaer and a member of the university’s Future Chips Constellation, who led the research project. “Our new antireflective coating makes this possible.”
More >>>
Posted by Unknown at 3:24 PM No comments: 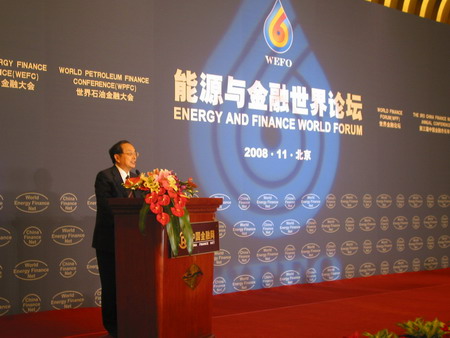 November 03 2008: Jiang Zhenghua, economist and former vice chairman of the Standing Committee of the National People's Congress, speaks at the opening ceremony of the World Energy Finance Conference in Beijing on November 2, 2008.

With the global financial troubles and oil prices fluctuating dramatically, experts from across the world gathered in Beijing yesterday to discuss global finance and energy security and solutions for sustainable development.

Held between November 2 and 5 at Diaoyutai Hotel, the World Energy Finance Conference has attracted government officials, economists and business executives from over 30 countries in energy, finance, and science and technology sectors.

But even more appealing are the two key words in the forum's theme -- Finance and Energy, which have been closely connected to the nation's development as well as individuals' pockets.

The latest financial storm started in the US has been sweeping from Wall Street to main streets across the world. Accompanying the financial crash is the landslide of international oil prices, which have plummeted from a historic high of $147 a barrel in July to $67 last week. More >>>
Posted by Unknown at 8:38 PM No comments: