How do we effectively communicate an important but difficult message, even as it appears to fall on deaf ears? The first essay in this month's Museletter addresses this thorny issue, one which I face every day in my work here at PCI, and which will be familiar to many of you. The second essay is a reminder that in some places the message is getting through and that change does happen. Richard hopes that you will find some hope in his report from a recent visit to Seoul, Korea. 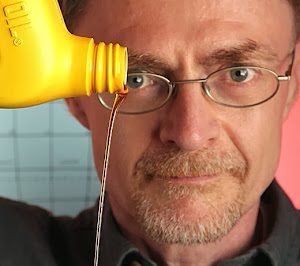 If we hope to avert climate apocalypse in the decades ahead, we must make fundamental changes to industrial society. Before those changes can be approved and implemented, citizens and policy makers must first come to understand they are essential to our survival. Public relations—the management of the spread of information between an individual or organization and the public—will be an unavoidably necessary tool in the process.

But a PR message capable of persuading policy makers and citizens to end society’s environmental rampage remains elusive. In this essay I hope to explore why an effective PR message is so hard to formulate, and how the whole project might be reconsidered.

Let’s start with what needs to be conveyed. After years of research and thought, I would summarize our dilemma with three general conclusions:

1. Energy is the biggest single issue facing us as a species.*

Global warming—by far the worst environmental challenge humans have ever confronted—results from our current fossil-fuel energy regime, and averting catastrophic climate change will require us to end our reliance on coal, oil, and natural gas. Ocean acidification is also a consequence of burning fossil fuels, and most other environmental crises (like nitrogen runoff pollution and most air pollution) can be traced to the same source.

Therefore ending our addiction to fossil fuels is essential if we want future generations of humans (and countless other species) to inherit a habitable a planet. But these energy sources are “unsustainable” also in a more basic, economic sense of the term: oil, gas, and coal are depleting, non-renewable resources. Already, depletion of the easy-and-cheap sources of petroleum that drove economic growth in the 20th century has led to persistently high oil prices, which are a drag on the economy. We have picked the low-hanging fruit of the world’s petroleum resources, and as time goes on all sources of fossil energy will become more financially costly and environmentally risky to extract. This is a big problem because the economy is 100 percent dependent on energy. With lots of cheap energy, problems of all kinds are easy to solve (running out of fresh water? Just build a desalination plant!); when energy becomes expensive and hard to get, problems multiply and converge.

One way or another, whether our concern is the environment or economic growth, it’s mostly about energy.

*Arguably, overpopulation is as big an issue as our energy-climate conundrum. I’ve chosen not to focus on it here merely to streamline the narrative. There are many feedbacks between population, energy, and climate, and these deserve discussion elsewhere.

2. We are headed toward a (nearly) all-renewable-energy economy one way or the other, and planning is essential if we want to get there in one piece.

If society is to avoid civilization-threatening levels of climate change, the use of fossil fuels will have to be reduced proactively by 80-90 percent by 2050.

At the same time, despite the claims of abundance of unconventional fuels (shale gas, tight oil, tar sands) by the fossil fuel industry, evidence overwhelmingly shows that drillers are investing increasing effort to achieve diminishing returns.

Either way, fossil fuels are on their way out.

Most nations have concluded that nuclear is too costly and risky, and supplies of uranium are limited.

3. In the process of transition, the ways that society uses energy must change at least as much as the ways society produces energy.

Every energy source possesses a unique set of characteristics: some sources are more portable than others, or more concentrated, intermittent, scalable, diffuse, renewable, environmentally risky, or financially costly. We have built our current economy to take advantage of the special properties of fossil fuels. The renewable energy sources that are available to replace oil, gas, and coal have very different characteristics and will therefore tend to support a different kind of economy—one that is less mobile, more rooted in place; less globalized, more localized; less when-we-want-it, more when-it’s-available; less engineered, more organic.

At the same time, the sheer quantity of energy that will be available during the transition from fossil to renewable sources is in doubt. While ever-more-rapid rates of extraction of fossil fuels powered a growing economy during the 20th century, society will struggle to maintain current levels of total energy production in the 21st, let alone grow it to meet projected demand. Indeed, there are credible scenarios in which available energy could decline significantly. And we will have to invest a lot of the fossil energy we do have in building post-fossil energy infrastructure. Energy efficiency can help along the way, but only marginally.

The global economy will almost certainly stagnate or contract accordingly.

There it is. It is a complicated message. I’ve just conveyed it in 661 words punctuated by three short summary sentences (here’s a summation of the summation: it’s all about energy; renewables are the future; growth is over.) However, only readers with a lot of prior knowledge will be able to truly understand some of these words and phrases. And many people who are capable of making sense of what I’ve written would disagree with, or dismiss, much of it. The message faces a tough audience, and it flies against deep-seated interests.

Many economists and politicians don’t buy the assertion that energy is at the core of our species-wide survival challenge. They think the game of human success-or-failure revolves around money, military power, or technological advancement. If we toggle prices, taxes, and interest rates; maintain proper trade rules; invest in technology R&D and discourage military challenges to the current international order, then growth can continue indefinitely and everything will be fine. Climate change and resource depletion are peripheral problems that can be dealt with through pricing mechanisms or regulations.

Fossil fuel companies may understand the importance of energy, but they have a powerful incentive to avoid acceptance of the message that “renewables are the future.” If humanity is headed toward an all-renewable energy economy, then their business has no future. The industry’s strategy for diverting the general public’s buy-in to conclusion 2 is to claim that there is plenty of oil, gas, and coal available to fuel society for decades to come.

Some policy wonks buy “it’s all about energy,” but are jittery about “renewables are the future” and won’t go anywhere near “growth is over.” A few of these folks like to think of themselves as environmentalists (sometimes calling themselves “bright green”)—including the Breakthrough Institute and writers like Stewart Brand and Mark Lynas. A majority of government officials are effectively in the same camp, viewing nuclear power, natural gas, carbon capture and storage (“clean coal”), and further technological innovation as pathways to the solution of the climate crisis without any need for curtailment of economic growth.

Other environment-friendly folks buy “it’s all about energy” and “renewables are the future,” but still remain allergic to the notion that “growth is over.” They say we can transition to 100 percent renewable power with no sacrifice in terms of economic growth, comfort, or convenience. Stanford professor Mark Jacobson and Amory Lovins of Rocky Mountain Institute are leaders of this chorus. Theirs is a reassuring message, but if it doesn’t happen to be factually true (and there are many energy experts who argue persuasively that it isn’t), then it’s of limited helpfulness because it fails to recommend the kinds or degrees of change in energy usage that are essential to a successful transition.

The general public tends to listen to one or another of these groups, all of which agree that the climate and energy challenge of the 21st century can be met without sacrificing economic growth. This widespread aversion to the “growth is over” conclusion is entirely understandable: during the last century, the economies of industrial nations were engineered to require continual growth in order to produce jobs, returns on investments, and increasing tax revenues to fund government services. Conclusion 3, which questions whether growth can continue, is therefore deeply subversive. Nearly everyone has an incentive to ignore or avoid it. It’s not only objectionable to economic conservatives, it is abhorent to many progressives who believe economies must continue to grow so that the “under-developed” world can improve standards of living.

But ignoring uncomfortable facts seldom makes them go away. Often it just makes matters worse. Back in the 1970s, when environmental limits were first becoming apparent, catastrophe could have been averted with only a relatively small course correction—a gradual tapering of growth and a slow decline in fossil fuel reliance. Now, only a “cold turkey” approach will suffice. If a critical majority of people couldn’t be persuaded then of the need for a gentle course correction, can they now be talked into undertaking deliberate change on a scale and at a speed that might be nearly as traumatic as the climate collision we’re trying to avoid?

To be sure, there are those who do accept the message that “growth is over”: most are hard-core environmentalists or energy experts. But this is a tiny and poorly organized demographic. If public relations consists of the management of information flowing from an organization to the public, then it surely helps to start with an organization wealthy enough to be able to afford to mount a serious public relations campaign.

This is all quite discouraging, to the point that a fourth conclusion seems justified: More

Posted by Unknown at 6:33 PM No comments: