The United States Federal Government to Help Hawaii Move to 70% Renewables by 2030 HONOLULU, Hawaii, January 28, 2008 (ENS) - Rich in sun and wind, Hawaii is on track to become one of the world's first economies based on clean energy resources under a long-term agreement signed today by representatives of the state and federal governments. The agreement sets a goal of using renewable resources such as wind, sun, ocean, geothermal, and bioenergy to supply 70 percent or more of Hawaii's energy needs by 2030.

Hawaii gas prices are the highest in the nation. AAA and the Oil Price Information Service say the national average is $2.98 a gallon. In Hawaii, it's $3.50 a gallon, up 56 cents from a year ago.

Another goal of the initiative is to curb climate change. In 2007, Hawaii became the second state in the nation, after California, to establish a cap on greenhouse gas emissions. More >>>

Crown Prince General Sheikh Mohammed bin Zayed Al Nahyan told more than 4,000 participants at the summit that the investment will be channelled through the Masdar Initiative, a company that aims to explore, develop and commercialize future energy sources.

"We hope that our Masdar projects will inspire others to seek alternative sources of energy," said Sheikh Mohammed.

Masdar will leverage the Abu Dhabi government's initial US$15 billion investment with joint ventures and other investment partners to create a portfolio many times larger, comprised of projects in Abu Dhabi, the MENA region and globally.

The crown prince also announced today the establishment of the Zayed Future Energy Prize, awarding $US2.2 million annually to honour individuals and organizations for their excellence in the innovation, development and implementation of sustainable energy solutions. 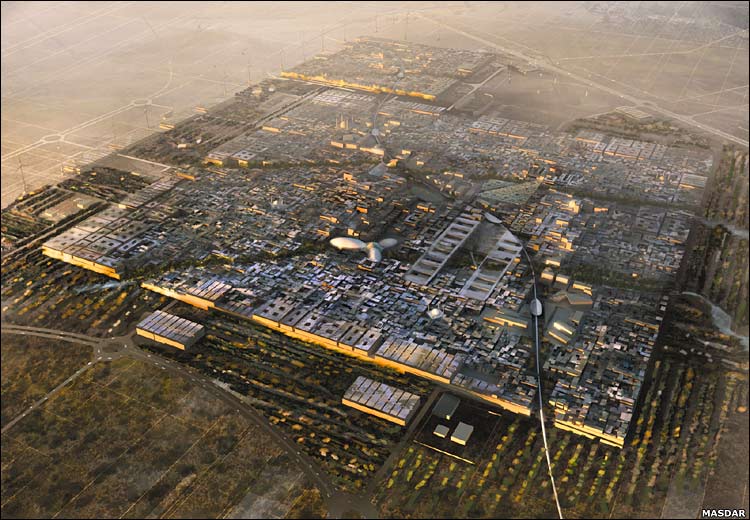 The government of Abu Dhabi has announced a $15bn (£7.5bn) initiative to develop clean energy technologies.

The Gulf state describes the five-year initiative as "the most ambitious sustainability project ever launched by a government". Components will include the world's largest hydrogen power plant.
The government has also announced plans for a "sustainable city", housing about 50,000 people, that will produce no greenhouse gases and contain no cars. The $15bn fund, which the state hopes will lead to international joint ventures involving much more money, is being channelled through the Masdar Initiative, a company established to develop and commercialise clean energy technologies. "As global demand for energy continues to expand, and as climate change becomes a real and growing concern, the time has come to look to the future," said Masdar CEO Dr Sultan Al Jaber. More >>>

Posted by Unknown at 8:51 PM No comments:

A Swiss-designed artificial island is set to make its first appearance in the Gulf state of Ras al Khaimah, with the aim of providing a source of clean energy.

The project, a collaboration between Neuchâtel's Swiss Center for Electronics and Microtechnology (CSEM) and the local government, should be able to produce electricity and hydrogen using solar power. But according to Thomas Hinderling, the centre's director, solar energy will become a major power resource in the next 20 to 30 years and will be the leading form of renewable energy.

"A third of the world's future power needs could be covered by solar energy," Hinderling told swissinfo. "But to collect that energy, you need an array surface equivalent to 60 per cent the size of France." The solution proposed by the centre is to build artificial islands that can sit offshore, where surface is not a problem.
To cut costs, the usual solar panels would not be used, but rather a concentrator that heats water running through pipes. The steam is then used to generate electricity [and hydrogen]. More >>>

Posted by Unknown at 4:22 PM No comments:

The New Energy Law Will Change Light Bulbs, Appliances and How We Save Electricity in the Home. Sunday, January 20, 2008

From light bulbs to clothes washers, the energy law passed by Congress and signed by President Bush in December will change many of the appliances in the average American home.
The incandescent light bulb, invented two centuries ago and perfected and popularized by Thomas Edison in the late 1800s, will become a thing of the past by the middle of the next decade.

The look of the future? The curvaceous compact fluorescent bulbs that recently have become popular and other bulbs featuring light-emitting diodes or other advanced technologies.
The energy law will also bring about important but less noticeable changes in the way clothes washers, dishwashers, boilers and dehumidifiers use energy and water.

The goal is to reduce U.S. electricity use, a major source of greenhouse gases that scientists say contribute to global climate change. Half of the nation's electricity generation comes from coal-fired plants, which emit carbon dioxide. Moreover, if households cut electricity used for lighting and appliances, it could become easier to introduce electric cars, which could cut oil use without creating the need for a massive, new electricity-generating investment. More >>>
Posted by Unknown at 9:24 AM No comments: Ireland is to ban the sale of traditional light bulbs from next year and promote the use of low-energy CFL bulbs, environment minister John Gormley said Thursday.

He said the switch will see Ireland lead the way in Europe -- just as it taken the lead with its ban on smoking in public places and its levy on plastic shopping bags.

"The ultimate aim of this measure is to increase energy efficiency in Irish homes and businesses by facilitating a move to energy efficient light bulbs," said Gormley, who leads Ireland's Green Party.

"Ultimately, it will lead to savings of more than 180 million euros (263 million dollars) a year for Irish consumers and reduce emissions in Ireland by 800,000 tonnes, or one percent of its total." More >>>
Posted by Unknown at 8:42 AM No comments:

Switchgrass grown for biofuel production produced five times more energy than needed to grow, harvest and process it into cellulosic ethanol, finds a large farm study by researchers at the University of Nebraska-Lincoln published Monday.

"This clearly demonstrates that switchgrass is not only energy efficient, but can be used in a renewable biofuel economy to reduce reliance of fossil fuels, reduce greenhouse gas emissions and enhance rural economies," said principal researcher Ken Vogel, a U.S. Department of Agriculture-Agricultural Research Service geneticist in the university's agronomy and horticulture department. More >>>