Copenhagen aims to become the world’s ‘Eco-Metropole’ – the lowest-emitting city on the planet, with harnessed winds, a pristine harbour and cyclists ruling the roads

COPENHAGEN - An inner-city harbour with water so clean the fish are for eating and the beaches for swimming. Offshore wind farms in the waters beyond, piped to the power grid on two generations of Danish brainpower. Underfoot, a district heating network that squeezes every possible joule of warmth from some of the world’s most efficient electricity plants, keeping 97 per cent of Copenhagen toasty.0329 03 1

And here on the ground, a city where cyclists outnumber motorists during the downtown commute on close to 400 kilometres of dedicated lanes so safe that the vast majority don’t even bother wearing helmets, which aren’t mandatory anyway.

At first glance, Copenhagen is everything the brochure says: a hand-shaped city where each finger of suburb is separated by green space and in each fingerbone, a transit corridor of trains and buses, car and bike lanes to the central palm, where many of the globe’s deepest environmental thinkers can be found. More >>>
Posted by Unknown at 5:53 PM No comments:

28 Mar 2008, NEW DELHI: For Sarthak Behuria, chairman of state-owned flagship refiner-marketer Indian Oil Corporation, energy security goes beyond merely ensuring uninterrupted supplies at affordable costs to making sure that consumers conserve energy and when they need it, use fuels efficiently to reduce impact on environment.

“As the demand for energy increases, one way to lessen the impact is to ensure that it is used more efficiently,” he told delegates attending the 93rd International Petroleum Week in London organised by the UK-based Energy Institute.

"The most confounding problem that humanity would face in the next decade will be to find a simultaneous solution to its energy needs while addressing the concerns of global climate change world over, economies need to progressively move towards attaining higher levels of economic growth with reduced levels of energy consumption," Behuria said in his address, delivered through video-conferencing. More >>>
Posted by Unknown at 9:41 PM No comments: Oil's recent slide and the slackening demand that an economic slowdown's expected to bring have stimulated hopes that crude could soon safely stabilize below the $100 range। But beneath seesawing supply and demand lies the deeper question of just how much oil the planet has in the first place — and how much it will have in the future.

20 Mar 2008 The answer to that question supports — or undermines — the theory that we are in the midst of an ever-tightening supply that will lock prices into a permanent, rising arc। That, in nutshell, is what's meant by the term "peak oil".

It’s an issue that matters, especially to major energy players who are in a race to disprove the theory and trying to bring on-stream more oil fields than are currently being depleted.
John Hofmeister, president of Royal Dutch Shell's US operations, shared his thoughts on the supply issue on CNBC’s Squawk Box on Thursday. He took aim at the peak oil theory as popularized by Matthew Simmons, the author of "Twilight in the Desert: The Coming Saudi Oil Shock and the World Economy." (See the Hofmeister interview at left.)

HOUSTON, Texas, March 14, 2008 (ENS) - Today at the Port of Houston federal officials announced tough new emissions standards for locomotive and marine diesel engines. The standards will be achieved through the combination of ultra-low sulfur diesel fuel and advanced engine systems.

"This is another step in the continuing process to bring cleaner air to Texas and the nation," said Greene. "Each step brings new achievements and cleaner technologies to improve the health of our residents and our quality of life." More >>>

Posted by Unknown at 9:32 PM No comments:

February 18, 2008. I’m always on the look out for clean, efficient alternatives to harvesting hydrogen, compared to the energy-intensive options currently available. You see, if the hydrogen economy will one day become a reality, we’re not going to want coal-fired plants providing the energy to create the fuel to run these clean, green cars. Currently, for every kilogram of hydrogen produced, 9.3 kilograms of carbon dioxide are also created. No good.

Some Penn State researchers announced today that they’ve created a solar cell that can effectively split water to harvest the hydrogen. There’s quite a large amount of technical detail in the ‘how’, but the researchers expect an efficiency level of about 15%. The odd thing about this ‘discovery’ is that we’ve written about it before. In fact, a company by the name of Nanoptek recently released details on a “low-cost, durable titania electrode that can split water molecules into hydrogen and oxygen.” A space 50 feet by 50 feet on a sunny roof could provide enough surface area for a Nanoptek hydrogen generator to supply enough energy for a family of four. They’ve already got $4.7 million in the bank to continue research. More >>>
Posted by Unknown at 7:07 PM No comments: 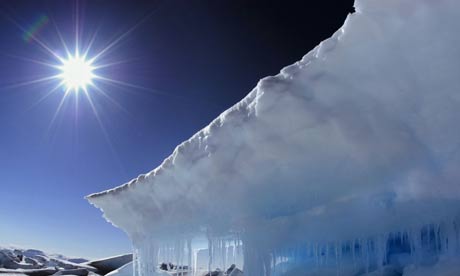 The EU report warns of increasing international tensions as global warming opens up new areas for energy exploitation.
European governments have been told to plan for an era of conflict over energy resources, with global warming likely to trigger a dangerous contest between Russia and the west for the vast mineral riches of the Arctic.

A report from the EU's top two foreign policy officials to the 27 heads of government gathering in Brussels for a summit this week warns that "significant potential conflicts" are likely in the decades ahead as a result of "intensified competition over access to, and control over, energy resources". The seven-page report, obtained by the Guardian, has been written by Javier Solana, the EU's foreign policy supremo, and Benita Ferrero-Waldner, the commissioner for external relations. It predicts that global warming will precipitate security issues for Europe, ranging from energy wars to mass migration, failed states and political radicalisation. More>>>
Posted by Unknown at 6:11 PM No comments:

When will Peak Oil Strike? The Renewable Energy Centre.co.uk comments on the Debate.

Peak Oil has been the subject of debate for many years and has largely been ignored by industry optimists but has continually worried many industry experts.

Mar 07, 2008 – The big question has it seems, finally been answered with new projections placing the point of peak oil occurring within the next 10 years. The Renewable Energy Centre.co.uk today commented on the debate and the possible consequences of an early end to the UK’s oil dependant existence. It has been cited that the global discovery of oil actually peaked in 1962 and has been in decline ever since. This has been backed by fact that oil companies have cut oil exploration spend over the last 10 years and production of oil has stagnated at 85m barrels per day. More >>>
Posted by Unknown at 10:57 AM No comments:

Adjusted for inflation, Monday's top price of $103.95 a barrel eclipses the previous record set during the Iranian hostage crisis in 1980, analysts say.

March 4, 2008
The gravity-defying price of oil shot through another barrier Monday by briefly touching $103.95 a barrel in New York trading, the highest cost ever for black gold even after adjusting for inflation.

Before Monday, the April 1980 price of $38 was the pinnacle, fueled by dramatic Mideast events including the failed rescue of American hostages in Iran. Adjusted for inflation, that $38 is now more than $103. This time, rather than a political crisis, the main culprit is decidedly less spectacular: a weak dollar.

For consumers and the nation's economy, triple-digit oil prices are being felt broadly, boosting costs from the gas pump to the grocery store and crimping sales of light trucks, tires and pleasure tours. More >>>
Posted by Unknown at 2:43 PM No comments: