September 17 2008 Securing the country's supply of electricity is more important than tackling climate change, a new report from energy analysts has claimed.

It warned that the UK's economy could be wrecked if there was no action to plug the energy shortfall predicted for the next decade, with businesses going bust and hundreds of thousands of people losing their jobs.

But the report, led by Ian Fells, emeritus professor at the University of Newcastle and a veteran energy policy analyst, has been dismissed as "naive" by Greenpeace, and "overstated" by the energy secretary John Hutton. Environmentalists argued that the report's recommendation for new coal-fired power stations went against the advice of scientists and that the rest of the world was forging ahead with renewables.

The report said the government had to consider extending the lifespan of the UK's ageing coal and nuclear power stations to meet the impending shortage. Otherwise, Fells warned, the UK would be be hit by repeated power cuts that would shut down public transport, reduce hospital services and cause chaos in supermarkets and offices. "Electricity is the life blood of civilisation. Without it we spiral down into anarchy and chaos. More >>>
[Only through the use of carbon capture and storage / sequestration could we continue using coal fired power plants. Ed]
Posted by Unknown at 6:34 PM No comments:

August 10th, 2008: This post examines ethical issues that arise when a government does not take action to reduce its greenhouse gas (GHG) emissions from coal fired powered plants because it plans to eventually use carbon capture and geologic storage technology (geologic carbon storage) to sequester carbon dioxide produced in coal combustion.

As more fully set out in a prior post, geologic carbon sequestration is a hopeful but unproven technology for reducing climate change’s threat which raises a number of ethical issues that should be considered in regard to its deployment. (http://climateethics.org/?p=38)

This post looks in more detail at one of these ethical issues, that is, ethical issues that arise by waiting for this hopeful but unproven technology to be perfected while continuing to emit GHG from existing coal fired power plants. More >>> 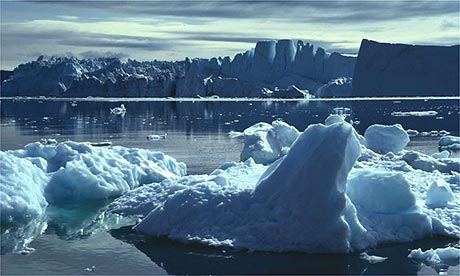 By the end of the century sea levels may be rising three times as fast as they are at present, as a result of rapid melting of the Greenland ice sheet

The vast Greenland ice sheet could begin to melt more rapidly than expected towards the end of the century, accelerating the rise in sea levels as a result of global warming, scientists warned yesterday.

Water running off the ice sheet could triple the current rate of sea level rise to around 9mm a year, leading to a global rise of almost 1 metre per century, the researchers found. More >>>