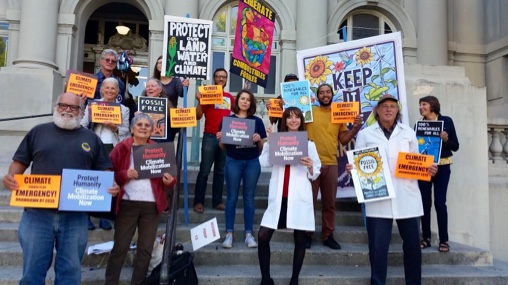 As a result of local organizers’ tireless work, the Berkeley City Council faced the truth of the climate and ecological crises and committed to protecting its residents and all life on Earth by unanimously declaring a climate emergency and endorsing a just citywide climate mobilization effort to end greenhouse gas emissions emissions as quickly as possible!
The resolution called for Berkeley to become a carbon sink by 2030, which the energy commission will study. It also called on all other governments to address the crisis at the speed and scale required, setting in motion a nine-county Bay Area climate emergency town hall this summer aimed at catalyzing local, regional, state, national and global mass mobilizations to restore a safe climate and a collaborative regional mobilization effort. You can read the full text of the resolution here.

In the same hearing, the council took a critical first step in realizing the mobilization by voting to refer a Fossil Free Fast resolution to the city’s energy commission. Under this resolution, Berkeley would actively oppose new fossil fuel infrastructure, making it the first municipality in California and the second in the nation to move forward such a sweeping block. You can read the full text of the resolution here.